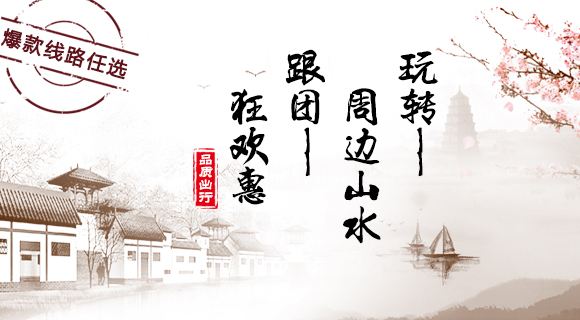 Top 10 Attractions in Shenyang
1. Shenyang Forbidden City: Shenyang Forbidden City is the most complete imperial palace building in China, second only to the Forbidden City in Beijing. It is located in the old city center of the Ming and Qing Dynasties in Shenhe District, Shenyang City. Historical and cultural connotation.
2. Qipanshan: Qipanshan Scenic Area is located in the northeast of Shenyang, Liaoning, about 20 kilometers from the center of Shenyang. Green in spring, summer scenery, autumn maple, winter snow and well-known international women's world chess championship competition.
3. Shenyang Beiling: It is located about ten miles north of the ancient city of Shenyang (Shengjing), so it is also called "Beiling". It is a tourist attraction where the royal tombs and modern gardens of the Qing Dynasty are integrated.
4. Fangtian Happy World: Shenyang Fangtian Happy World is located in Shengjing Street, Shenbei New District, Shenyang, covering an area of about 500,000 square meters. It is the largest fourth-generation theme park in Northeast China.
Fantawild World features sci-fi and interactive experiences as its biggest features. It is comparable to the most advanced theme parks in the West, and is known as "Oriental Fantasy Paradise" and "Asian Science Fiction Magic."
5. Dongling Park: Dongling Park is located in Dongling Park in the eastern suburbs of Shenyang. It is the tomb of Qing Taizu Nurhachi and Emperor Xiaoci Gao Yehenala. Because it is located in the eastern suburb of Shenyang, it is also called Dongling.
6. Liaoning Provincial Museum: The Liaoning Provincial Museum is one of China's famous historical and artistic museums. Located at 26 Shiwei Road, Heping District, Shenyang City Center. The building was formerly the official residence of Tang Yulin, the regency warlord of Rehedu. After the "9, 18" incident, the pseudo-Manchu government established the "Fengtian Branch of the National Museum" here.
7. Shenyang World Expo Park: Located in Qipanshan International Scenic Tourism Development Zone, Shenyang has 53 domestic exhibition parks, 23 international exhibition parks and 24 specialized exhibition parks. It has the largest area in the world's previous horticultural expo so far. One term.
8. Shenyang Ice and Snow World: Shenyang Ice and Snow World is located in Qipanshan Scenic Area in the northeast of Shenyang City, 17 kilometers away from the urban area. The transportation is very convenient. Square meters.
9. Shenyang Botanical Garden: Shenyang Botanical Garden is located in Zhongma Village, Gaokan Town, Dongling District, Shenyang City. It has the titles of "Top 50 Best Views in Liaoning Province" and is a plant science, plant science and plant landscape. The combination of human landscape, scientific research, popular science bases and tourist attractions as a whole, combining ornamental with knowledge and entertainment.
10. Qixing Mountain: Shenyang Qixing Mountain Tourism Scenic Spot is located in Shifosi Township, Xinchengzi District, Shenyang City. It is backed by the Liaohe River and connected to Shenyang in the south. Shenming Highway runs through the territory and is close to the edge of the scenic spot. It is 30 kilometers away from Shenyang in the south, 14 kilometers away from Xinchengzi District in the east, Xinmin City in the west, north, and Faku County across the river. The scenic area has beautiful natural scenery and superior environment.

Shenyang Transportation
Shenyang is one of the most important transportation hubs in Northeast China. There are many ways to reach Shenyang.
The only airport, Taoxian International Airport, has many routes, and there are direct flights from major cities in China.
The urban area currently has two passenger railway stations, Shenyang North Station and Shenyang Station. Both stations are located in the urban area, and the surrounding traffic is relatively convenient. Among them, Shenyang North Station stops more trains than Shenyang Station.
In terms of road transportation, Shenyang has more than ten bus stations and four major long-distance passenger stations. Beijing and major cities in the three northeast provinces have opened high-speed buses directly to Shenyang.

Shenyang cuisine <br /> Shenyang cuisine has a long history and superb production. Based on Manchu cuisine, it has borrowed and developed the traditional court's excellent technology, and gathered the essence of Chinese famous dishes, forming its own unique style. The Liaoning cuisine formed after a long period of brewing is very complete in Shenyang, and has been continuously influenced by the major cuisines in the country, especially the Shandong cuisine. Liaoning cuisine is based on the mountain and wild game in the neighboring areas. Known as "fried, fried, and cooked", and almost every famous dish has different historical allusions or legends, allowing people to enjoy spiritual pleasure while savoring delicious food. Famous Liaoning dishes include orchid bear paw, phoenix fresh abalone, Kirin gift, red plum fish belly, Yulongxifeng and so on.
Shenyang is a city inhabited by Han and many ethnic minorities. Historically, Shenyang has been ruled by ethnic and Han ethnic groups in turn. Because of its special historical status, for a long time, flavor snacks of various nationalities across the country have been gathered here. Fusion and innovation, many local flavor snacks have now been formed, such as Korean-style West Korean cold noodles, Korean-style baking cakes, old-edge dumplings, roast beef, Laoshanji Haicheng pies, Manchu snacks and white meat Blood sausage, Hui snacks such as horse roasted wheat.

I am a merchant and I want to settle in